Below is a summary of my homebrew activities, built around a 3-watt CW transmitter for 40 meters or 80 meters, based on an article in QST, June 1967 by Doug DeMaw (W1FB) and an adaptation thereof by KC6WDK.

It was this photo by KC6WDK that really spoke to me and made me realize that I wanted to build a transmitter instead of buying a transciever:  3W Transmitter

Here's the history of my version (40 meters only) of this transmitter project:

The first version was built in a steel card-file box with a hinged lid for the chassis. The lid was electrically connected to the bottom by a thick wire. Paint was ground away where needed to provide a good connection to the chassis. I used NTE 128 as a substitute transistor, and I used fundamental cut HC6/U crystals for 7110 and 7125 kHz. Output was less than 1 watt and Q2 ran too hot. Messy wiring was causing most of the problems:

I never had any indication that anyone heard me. My antenna is a dipole for 40 meters, but it was only 7 feet off the ground.

Since then, I have replaced Q1 and Q2 and rebuilt the transmitter using the photo in QST as a guide. I was able to use just the lid of my former assembly as the chassis. I eliminated an etched circuit board (my own design, which turned out to be worse than useless), the bottom section of the file box, and all the excess wiring that I originally used. I was finally able to raise the dipole to 15 feet.

I also found a mistake in my coil windings, so after an ugly rewinding attempt poorly secured with messy varnish, I bought all new wire and rewound the coils based on a formula I found in a 1943 edition of "Everybody's Radio Manual" (Popular Science). This time, I used Q-Dope to secure the windings. Performance improved immediately.

The transmitter (aka exciter) now has small angle braces with rubber feet attached at the bottom, to widen the unit and provide stability.

I am using a 12 volt power supply, which puts out 13.8 volts. 12 volts was stated to be an usable level of power by the original article, although output is thereby decreased by around 50 percent.

In 2004, when I told a local radio supply store guy what I had built, he replied "Oh...the intermod special". So then and there I decided to build a lowpass filter, which is now between the transmitter and the Miniboots amp.

I also began using a PTO/VFO, built from a kit purchased from WA6OTP.

I managed to acquire about 35 QSLs with my rig in 2004, all from the USA. The PTO/VFO suffered sudden trauma and stopped working in late 2004, and other priorites kept me away from amateur radio until 2011. I troubleshot the rig during the winter of 2011/2012 while refreshing my CW skills. 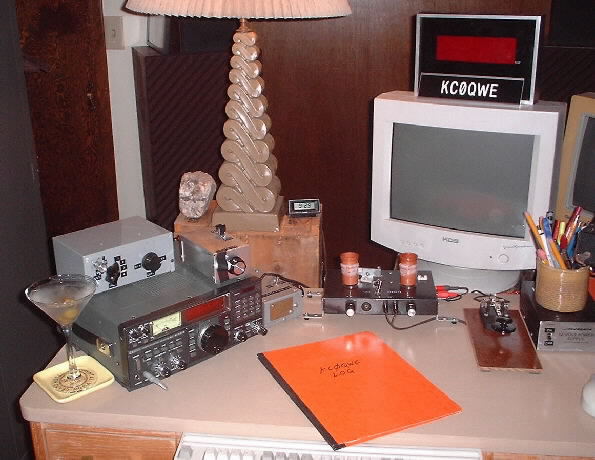 Regarding the above photo:

Here's the transmitter's wiring (since I did away with the circuit board and cleaned things up with point-to-point wiring in 2004):

I probably should have used a more recent transmitter design. But because this is consisdered a "classic" design that's been thoroughly tested, I figured I'd learn a lot. And I believe I did.

Here's a closeup of the interior of the PTO/VFO. I used the "ground plane" construction method. There is a rocker switch on the top which turns the power on and off. There was a hex nut epoxied to the front, through which I inserted a bolt with a felt pad cemented to the end. I used this to apply tension to the tuning knob. It made zero-beating easier, and reduced drift caused by minute movement of the knob due to vibration. With pressure applied to the knob, the device drifts about 10 Hz/minute:

Here's a closeup of bottom of the PTO/VFO enclosure - weighted with two steel bars for stability.

Here's a four-inch diameter bakelite knob I found at a junk store. It's from a very old radio, and is incremented from 1-100. It has a set screw and will fit a standard shaft. I think it will make precise VFO/PTO adjustments easier when I rebuild the device. I will need to attach a 5" faceplate to the enclosure, however:

To the immediate right of the receiver in the shack photo is the NorCal Miniboots amp designed by Wayne McFee (NB6M). It has a built-in lowpass filter. I used the "ground plane" construction method for this device, also. Here's a closeup of its exterior:

And its guts...note the many holes drilled in the bottom of the enclosure. They're not for ventilation; this enclosure used to house an audio patch bay filled with RCA jacks.

The Miniboots amp uses an RF-triggered relay to switch between transmit and receive modes (it switches the antenna between the receiver and amp). My adaptation also uses a second relay, which keys the transmitter and simultaneously switches the amp's output from antenna to dummy load (the black cylinder) when 12 V is applied via a foot switch. This is how I zero-beat with this rig. The receiver's meter is nearly pegged when transmitting and zero-beating, but no harm seems to be done, so for simplicity's sake I'm leaving it like that instead of generating a sidetone. Output is around 8 watts. There is a "QRO/QRP" switch on top, but I disabled it since I don't transmit with anything under 8 watts anymore.

The entire setup passed a formal inspection shortly after completion in 2004:

Seven years later, the inspectors have matured, are receiving spiritual guidance, and can't be bothered with KC0QWE anymore:

Many thanks to Steve Smith WB6TNL, Howard Kraus K2UD, and others for assistance in troubleshooting!